The Hackney School of Food has been dubbed a huge success at its official opening by local MP, Meg Hillier.

The school which has a vegetable garden, beehives, chickens, pizza oven and state of the art cooking classroom that caters for all heights and ages was officially opened on Saturday (11th Sept).

Dame Meg Hillier, Labour MP for Hackney South and Shoreditch, was joined by Deputy Mayor, Cllr Anntoinette Bramble, and the author of the National Food Strategy, Henry Dimbleby, at the launch. The trio praised the project for its potential impact on child health.

The school’s official opening has been pushed back because of the pandemic but it has been offering regular cooking classes to students from primary and secondary schools across London.

The children help grow and harvest fruit and vegetables and then learn to turn the produce into meals.

The school links food education to other subjects – such as maths and business – giving children a range of experiences. Pupils have launched pizza ventures from the site, been development chefs for the meal delivery company Tastily and appeared in a cookbook photoshoot.

The school, designed by the architects Surman Weston, was the brainchild of Louise Nichols, Exec Head of the LEAP Federation, Nicole Pisani and Henry Dimbleby, co-founders of the school food charity – Chefs in Schools. They saw the potential in a disused building and began fundraising to create a food hub that would benefit kids, chefs and the community.

“The Hackney School of Food is a huge success. Local children have a fantastic space to come and learn and cook. It’s the very best of facilities – the Rolls Royce of classrooms. Cooking and eating together tackles many issues, boosting mental health and stopping loneliness. It’s a pleasure to be here to officially open the school. On this estate and at this school we are ahead of the curve, food is grown and nurtured in different spaces for local residents. Long may this go from strength to strength.”

“When I think back to what the site was like – a rundown building and piece of wasteland, it is incredible to see how far we have come. The gardens are thriving, the children are receiving an amazing education. But we couldn’t have done this without the support of the community and the many people who donated time and money. This is just the start for the school, many exciting projects are still to come.” 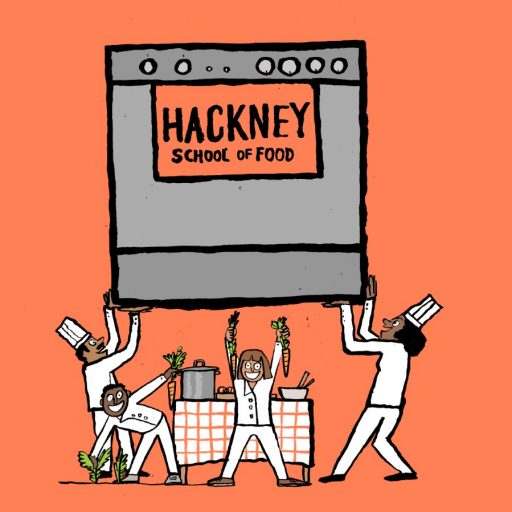